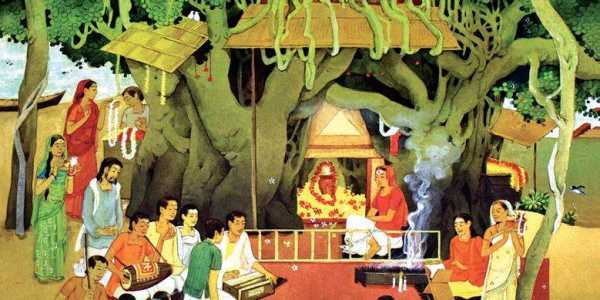 With an aim to conserve and promote the beauty of one of the oldest styles of art, gallery g is hosting an exhibition along with the Bengal School of Art

The secret behind Tempera’s longevity

BENGALURU : It was first popularised by brother and painters Abanindranath Tagore and Gaganendranath Tagore. Now, the tempera style, which has a 2,000-year-old history, proof of which is found in the Egyptian, Roman and later in Mughal and Rajput paintings, is being carried forward by artist Ajay Ghose. After his solo show was exhibited in gallery g in 2015, his current exhibition, displays some of the best works of his students.This is part of gallery g’s Artists Initiative Programme. City Express speaks to two tempera artists about this timeless art form, examples of which are still available from the first century AD. According to artist Partha Sarathi, there are only five or six artists in Kolkata who are working hard to keep this traditional art alive. Partha’s works are based on the daily lives and practices in West Bengal, and on Indian mythology.

For instance, in one of his works, he depicts a festival native to West Bengal where a girl child is worshipped as Ma Durga. “The Kumari Puja at Belur Math is very popular. I have also painted people sitting at the river bank and playing the iktara instrument. I try to put in contemporary elements in to paintings that reflect the daily life,” he says pointing out that the ancient art form is found in Mughal and Rajput paintings, as well as in the paintings of the Ajanta caves.

The main challenge of using the age-old technique, Partha explains, is the difficulty in keeping the egg yolk mixture for more than a day. This means that an adhesive has to be added every day in the right proportion. “For Tempera art, you mix the colour pigments with some fatty substance such as egg yolk, casein, gum or glycerin. You also add some anti-fungal powder to it. This is how the colours tend to last longer, especially considering the weather in India. On the other hand, oil paintings develop cracks after a few decades,” he says.

Artist Budhaditya Banerjee, who has also been been experimenting with the medium, combines both tempera and wash painting techniques. He fills in tempera colours (prepared with tamarind seeds or egg yolks), after which he applies the wash painting technique to remove loud colours.This, he says, gives the artwork a more transparent look and appeal. “I try to blend the main object in the work with the backdrop of my painting,” says the 32-year-old artist, who prefers a dark background against a light-coloured object.

For the last 15 years, Budhaditya has been using the tempera style. And over the years, he’s found that none of his works have been affected by fungus. “In addition, it also give me more creative freedom,” says the artist, whose works are mostly based on mythology.

“For example, for one of my paintings on Kumari Pooja, I rented a Benarasi sari for a day and made my student drape it and pose. Instead of creating a copy, I added a festive mood to the painting, just the way I imagined it. Also, in most of the Yashoda Nandlal paintings, you see Yashoda playing with her son or Yashoda seeing the universe inside Nandlal’s mouth, but I have portrayed them differently. I show Nandlal and Yashoda with rays of light coming towards them in the background.”

What is tempera art?

It is a method of painting in which the pigment is held together through a water solution mixed with either egg, casein, gum or glycerin. This method is executed with a medium of egg yolk, to which a little vinegar is sometimes added. Egg tempera was a primary method of painting until after the 1500s when it was superseded by the invention of oil painting.

Tempera paintings have been found on early Egyptian sarcophagi (a stone coffin, typically adorned with a sculpture or inscription, associated with the ancient civilisations of Egypt, Rome and Greece) decorations. Many of the Fayum mummy portraits use tempera, sometimes in combination with encaustic (hot wax painting). A similar technique has also been used in ancient and early medieval paintings found in several caves and rock-cut temples of India.