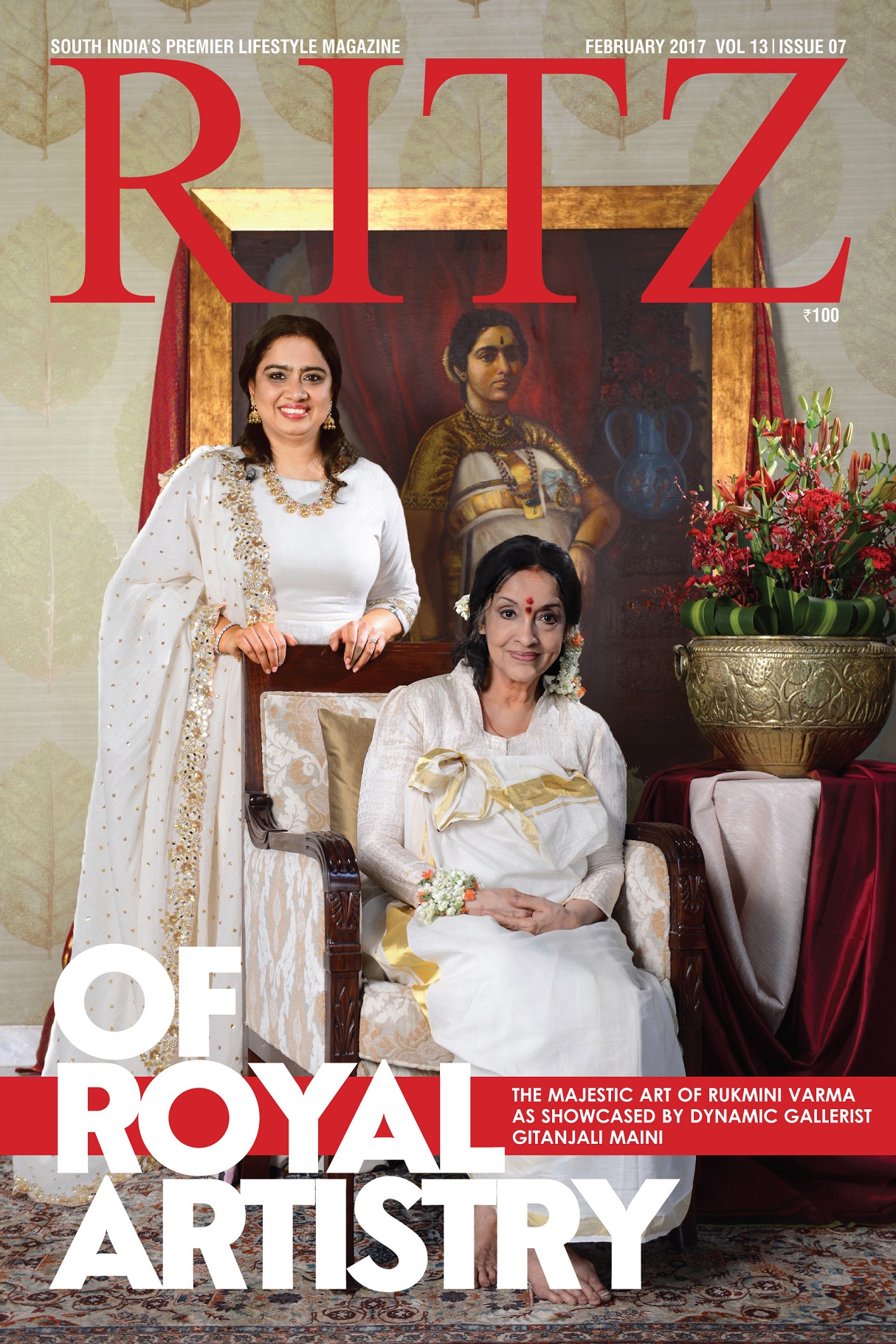 She wears many a jewelled tiara. That of the titular Maharani of Travancore, a classical dancer, a creative visionary, a self-taught artist and the great–great granddaughter of India’s foremost master, Raja Ravi Varma. Rukmini Varma, the graceful dame whose nimble fingers work magic with oil on canvas, presented her first solo exhibition of marvellous artworks in 35 years! The reclusive lady wowed art patrons and connoisseurs with a magnificent evocation of striking personalities from history and mythology, thanks to gentle persuasion by the vivacious and dynamic Gitanjali Maini, Founder Director of Bengaluru’s reputed Gallery-g. RITZ caught up with the two incredibly talented ladies over their hugely successful exhibition, inaugurated by former Union Minister SM Krishna, in the presence of Sangita Jindal, rekindling the legacy of the next generation of the House of Raja Ravi Varma and the royal House of Travancore.

“Rukmini Varma paints realistically. After her, her son Jay Varma whom we will launch in 2020 is really good. Both aunty and Jay are a chip of the old block, that is Raja Ravi Varma.” – Gitanjali Maini

“I am delighted to announce that all of the eleven major canvases that are displayed here were sold two months prior to this exhibition,” declared a beaming Gitanjali Maini as she stood proudly next to the exquisite Rukmini Varma, a lady brimming with radiance at the tremendous success of her first rendezvous with exhibitions in three and a half decades.

It was last in 1981-82 that Varma displayed her works at the Taj Gallery and the Jehangir Art Gallery in erstwhile Bombay. Such was the euphoria surrounding her show, which followed major exhibitions in India and Europe, opened by Governors and Presidents, that newspapers back then labelled the response as resulting in a “stampede”, causing even MF Husain to make a personal (barefoot) appearance to study the works and pay his regards to their creator. Cut to 2017 and Varma’s exhibition, Opulence & Eternity is replete with breath-taking life-size depictions of characters from history and mythology, made consciously flawless by her brisk brush strokes, richly weaving magnificent gems and jewels to accentuate their beauty and charisma. “Gallery-g has believed in giving artists a platform to present their creative talent. We have curated many shows for wonderful talents like Mohammed Oosman, Buwa Shete and Bharati Prajapati and successfully sold several works of masters like Yusuff Arakkal, S H Raza, Jogesh Chandra Seal, amongst countless others. Aunty (Varma) has been painting within the confines of her home since her last exhibition in Mumbai, but has never really displayed her work outside. I told her that the time is right to showcase her works to a larger audience,” says Maini, adding that the canvases in Opulence & Eternity encompass a diverse range of historical as well as legendary themes, and are simply marvellous in their splendour of style.

Varma agrees that she was reclusive all these years. She feels that art is more important than the artist. “I was painting for myself. I agreed to exhibit since Gitanjali’s dynamism is infectious. She encouraged me to display my works and then slowly I felt the need to personally communicate with people and express what I have been doing over the years,” says the soft-spoken Varma, who has in the past displayed her works across the globe and for whom painting equals breathing.

Born as Princess Bharani Tirunal Rukmini Bayi Tampuran of Travancore State, Varma took to painting (oil on canvas) at an early age, and says that she has had visions since her childhood of wonderfully clad and adorned men and women walking down palaces and temples, augmented by the very majestic daily presence of her grandmother, Maharani Sethu Lakshmi Bayi, at Satelmond Palace in Trivandrum, where she was raised.

“It was much later on in life that I realised that these figures mean something. That they symbolise well-being, prosperity, good health and bring about a certain tranquillity. That is why gods and goddesses were adorned with ornaments, as jewels and gems have across cultures been believed to possess a divine property and attract strong cosmic energies. Our flesh and soul is enhanced by diamonds, rubies, emeralds and sapphires – that is why kings and emperors were decked in jewels. We wear jewellery for all auspicious occasions because they symbolise positivity, prosperity, and a certain timeless divinity. That is why this exhibition is titled Opulence & Eternity,” says Varma. She showcases the beauty of the human form through her canvases, contrasting shades of skin against shimmering gold and gems.

“In 1982 when I exhibited in Bombay, many said it was a revival of Ravi Varma’s works. They found visual similarities, especially with the skin. There is certainly something other than blood that connects me to him” – Rukmini Varma

“The gems and jewels that Mrs Varma paints come alive on the persons of the men and women who occupy scenes of high drama and metaphoric meaning,” explains Maini, adding that Varma is also known for her extensive research before starting a new canvas. “In the Hoysala painting of the emperor Vishnuvardhan and his queen Shantala, she has investigated precisely every aspect associated with these historical figures. In fact, the size of the diamonds and emeralds that Mrs Varma has painted are as per the preferred dimensions in that time.” The Hoysala piece is a magnificent 12-foot tall painting that celebrates the love of Vishnuvardhan for Shantala and shows the emperor not in his warrior avatar, but as a romantic in the great temple in Belur. Varma’s works also include remarkably beautiful women depicted in sensuous settings, as well as more earthy women, all united by their innate strength and resolve. Like the Hoysala royals, Varma is equally fascinated by Egyptian history. The exhibition includes a captivating painting of Queen Tiye of Egypt with a chained cheetah. “I had this vision of an Egyptian queen holding a cheetah. When I investigated the concept, I discovered that in New York, they have a mummy that they think is of Queen Tiye and the royals of that era did train wild animals like leopards and cheetahs to keep as pets. I noticed that the mummy has Caucasian features and that Queen Tiye was very likely Persian. It is amazing to connect with these fascinating aspects of history,” says Varma, who believes that Egypt has a deep, ancient connection with India. “I will at some point further investigate that connection through my paintings.”

Varma’s technique is “intuitive”, and she mixes her own hues and shades, adding that “The three primary colours of yellow, red and blue are all I use and I get all my shades from these three. Then of course there is white.”

“Rukmini Varma, who was the toast of the international art world till the 1980s, has been a recluse and for years has not displayed her work. I convinced her that this must change, and that she must again showcase her work before a larger audience” – Gitanjali Maini

How often have her works been compared with those of Raja Ravi Varma? “In 1982 when I exhibited in Bombay, many said it was a revival of Ravi Varma’s works. They found visual similarities, especially with the skin. There is certainly something other than blood that connects me to him, but our styles are not 100 percent similar. The technique in some manner might be, however. My grandmother, the last Maharani of Travancore, was convinced that I was a reincarnation of her illustrious grandfather!” she adds, with a gentle laugh.

According to Maini, there is a clear line of artistic expertise in the Varma family. “Aunty paints realistically. After her, her son Jay Varma whom we will launch in 2020 is really good. Both aunty and Jay are a chip off the old block, that is Raja Ravi Varma.” Maini believes that for artists to succeed it is not just a good technique, but a vision that is required. “Raja Ravi Varma and Rukmini have that vision which brings into the painting the X factor.”